Artificial insemination, ovulation induction and scheduled intercourse are known as "low-complexity" assisted reproduction treatments because they do not require fertilization and embryo culture to be performed in a laboratory.

Although low complexity techniques are less invasive and costly, their probability of success is usually low, so in order to minimize the physical, economic and emotional toll on patients they are only used in very specific cases.

Generally, low-complexity techniques consist of stimulating ovulation by means of medication. In these, fertilization takes place naturally within the woman's body, so embryos cannot be monitored or analyzed.

Medications to stimulate ovulation carry risks such as multiple pregnancies and ovarian hyperstimulation syndrome, so their administration must be carefully monitored by a fertility specialist.

Assisted reproduction techniques of low complexity are divided into 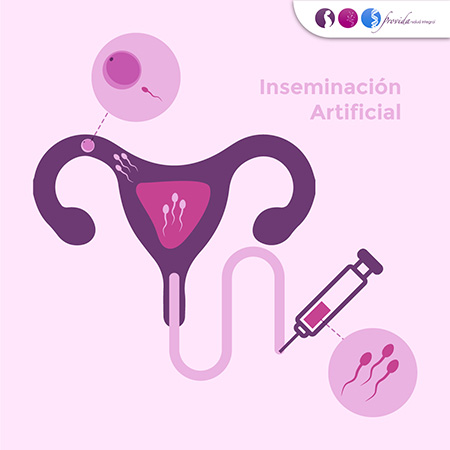 Artificial insemination (IUI) is a procedure in which a soft catheter is used to introduce the man's sperm into the woman's uterus just at the time of ovulation. Before insemination is performed, the fertility potential of the sperm is increased through a procedure known as sperm capacitation, which uses a series of washing and centrifugation techniques that remove cell debris, bacteria, leukocytes, poor quality sperm, and seminal secretions.

This method is used to facilitate fertilization in couples with unexplained infertility, mild spermatozoa alterations, problems with cervical mucus, among others. It is only recommended when the woman is under 37 years old, with a medical history of infertility of less than five.

To obtain better success rates with artificial insemination, it is essential that the woman's fallopian tubes are permeable and that the man's spermatozoa meet minimum parameters of normality. Success rates for artificial insemination vary depending on the woman's age, the causes of infertility, the man's sperm quality, and other factors. They range from 8 to 20 percent when drugs are used to induce ovulation and are as low as 4 percent without such drugs.

Women over the age of 40 have only a 2 percent chance of achieving pregnancy through this procedure, so it is recommended that they opt directly for highly complex methods. It is important to note that regardless of age, no woman should undergo more than two cycles of artificial insemination before opting for in vitro fertilization, which has much higher success rates.

It consists of the administration of drugs that make it possible to restore a woman's normal ovulation. They carry risks such as multiple pregnancies and ovarian hyperstimulation syndrome, so their administration must be carefully monitored by a fertility specialist.

Ovulation induction is recommended for women under the age of 32 with ovulation problems such as polycystic ovary syndrome and anovulation, as long as they have a history of infertility of less than three years, their fallopian tubes are permeable, and the man's sperm meets minimum parameters of normality.

A large percentage of women who undergo ovulation induction treatments succeed in ovulating, but not all of them manage to conceive or carry a pregnancy to term. The success rate of ovulation induction depends on a large number of variables such as the age of the patient or the existence of other factors causing infertility, and since most pregnancies occur during the first three to six cycles of this treatment, any subsequent attempts are likely to be unsuccessful.

This technique consists of monitoring the development of ovulation to determine the optimal time for the couple to have sexual intercourse and thus increase their chance of achieving pregnancy.

Scheduled intercourse can be combined with ovulation induction to increase the likelihood of pregnancy by increasing the number of mature eggs available.

This technique is useful for young couples with ovulation problems and in particular for fertile couples who want to increase their chances of conceiving, as long as the woman's fallopian tubes are permeable, and the man's sperm meets minimum parameters of normality.

When scheduled intercourse is combined with medication, better results are achieved, however, its success rates depend on the woman's age and the presence of other factors causing infertility. That is why at Provida we only recommend this treatment to patients under 32 years old with a medical history of infertility of less than three.